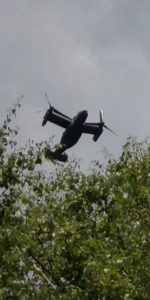 It started with a low rumble, gradually reaching an ear-splitting crescendo, as ominous Osprey V22s flew in formation across the sky, way too close to ground level for comfort. This wasn’t war-torn Waziristan, rather it was Finsbury Park on Monday afternoon. Whilst N4 is not unfamiliar with Met choppers circling low on a daily basis, side-rotored military-grade helicopters making the walls shudder and scattering the wood pigeons was a sobering sight to behold.

A quick Twitter search revealed they were transporting Secret Service personnel and equipment to London, ahead of Trump’s imminent arrival, and were a sign of things to come once he touches down on Thursday. While we grapple with such thorny issues as whether or not the Baby Blimp should be granted permission to take-off, our airspace is being violated in an altogether more sinister fashion as we speak.

And therein lies the rub. The Baby Blimp is, of course, a typically-English, mildly-amusing piece of satirical street (or sky) theatre, but hardly an act of barricade-storming defiance. Yet we down tools and debate for days the rights and wrongs of its planned launch, as though it matters in the slightest in the bigger picture.

Which brings us to the bigger picture of the protests in their entirety. Painted as a nationwide defiance of Trump and his mob rule, they are anything but. Like the anti-Brexit march a few weeks back, they resemble little more than a mass shiva, and should be painted as such if we are to be honest about the efficacy of their taking place.

In Jewish tradition, when a loved one dies, their closest relations sit shiva for a week-long mourning period immediately following the funeral. The relatives sit on low chairs in their house, while well-wishers pass through by day and night, comforting the mourners and congregating to bring a sense of relief and balm to the situation.

The deceased are remembered, their lives honoured through both eulogy and small talk, bread is broken and there is almost a sense of reverie at times as life  is celebrated and the healing process begins. All in good time, all in good place, and certainly a key part of communal life for both the mourners and those supporting them.

The anti-war march of 2003 was, whilst flawed, certainly a useful uniting of hearts and minds, and while not effective in the end, will have given pause for thought to those about to unleash the dogs of war. Similarly, the CND rallies and anti-NF marches I was dragged to by my parents and their friends in the 80s were direct-action events, and highly effective challenges to the status quo.

But thirty years on, and apathy reigns, only to be occasionally punctuated by gatherings such as planned for this Friday. Virtue-signallers unite, and even more so if you bring a child, pet or homemade pussy-pun banner to signalyour utter (day-long) commitment to the cause. Because where have all the protestors gone the rest of the year?

Why can such enormous numbers be mobilised one day, and dissipate and scatter for the other 364? That’s not to say there aren’t a sizeable crowd of dedicated, perennial activists who will attend who truly do live up to their idealseven when the sun isn’t shining and the cameras aren’t pointing their way.

But for the rest, this is as much of an I-was-there, conscience-salving event as colouring their Facebook profile picture with the Tricolore or ticking online petitions to save the bees. What possible difference can be made here, by shouting abuse to the wind? Trump and his henchmen couldn’t care less – they’ve faced down far worse en route to power, and are still oblivious to critique even today.

There are things that can be done to bring him down, to affect his voter base, to hurt his economy, but those are far too unsensational, far too unsexy, and far too much like hard work for most to attempt. Instead, we get Carnival a month or two early, and back-patting at dawn as the ‘activists’ set off for a nice sing-song and a craft beer with their mates when the sun’s too strong.

No one likes to feel politically impotent, but neither should they be duped into there being a latent potency in events like this. Hate Trump? Course you do. Know what to do to stop him? Course you don’t. But let’s be the tree falling in the forest anyway, because think of the Insta selfies we’ll get.

It’s not the sentiment that’s the problem, but the self-delusion about how to achieve results. I used to encounter the same every time I wrote about the BDS enterprise. I personally don’t think boycotting Israel is acceptable, but am all for boycotts as a political tool – but only if you hit em where it hurts. If you think Israel’s main export is Sodastream, then I can see your delight at ridding Brighton of the carbonated scourge.

Meanwhile, Israel grows fat off its real exports – the tech, the weapons, the services and skills – and BDS remains one of the most energy-intensive, results-deficient projects of its generation. And still they sing, shout and take the all-important selfies, just so you know they care. And were there.

While we still convince ourselves of the worth of worthless actions, while we still think we preach beyond the converted when we’re really just sitting shiva and comforting our own, then it’s not hard to see why nothing changes for the better. Roll up, roll up, for the Battle of Britain: Ospreys vs Blimps. There can be only one winner.